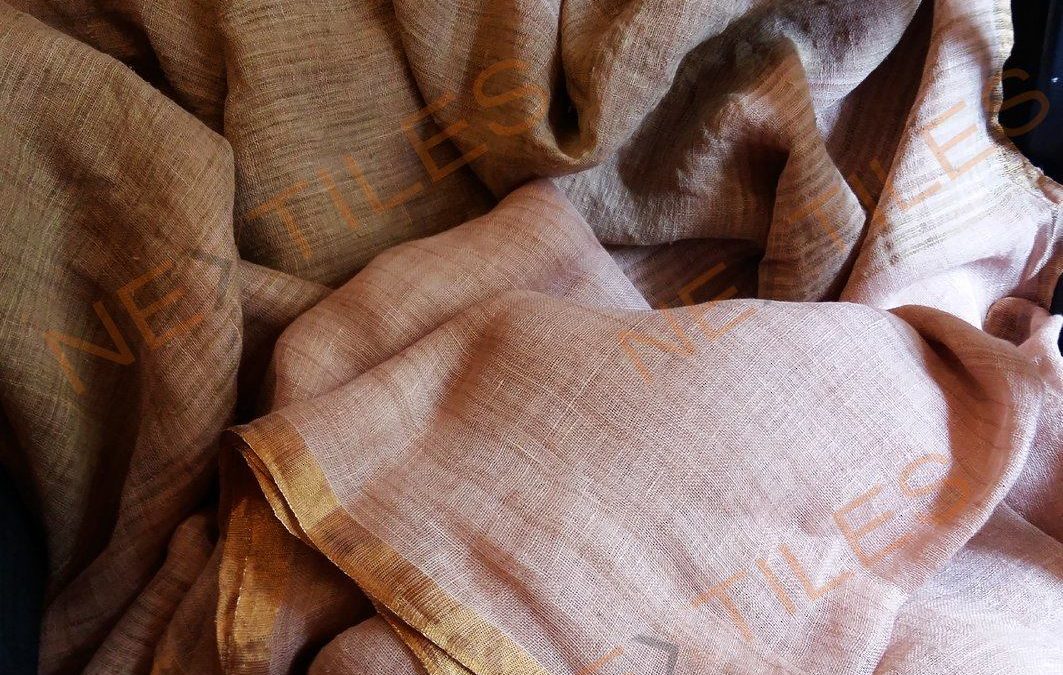 A love story with Linen

Linen- a timeless fabric made from fibres of the flax plant, that has a cool feel, is refreshingly breathable and becomes softer with wash and wear- an ideal fabric for the tropics.

From the ancient Egyptians to the Phoenician merchants to Irish mills…linen has really come a long way.

Let’s look at the history of linen.. 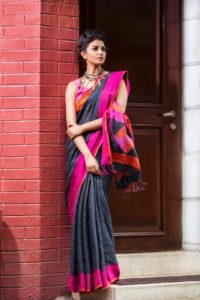 The first evidence of the use of woven linen fabrics can be established about 36,000 years ago, with dyed flax fibres found in a pre-historic cave in Georgia. Linen was extensively used in ancient Egypt for purposes of mummification and burial shrouds, and was also prevalent in Mesopotamia for use of higher classes. Later, the Phoenician merchants brought the art of flax growing and the making of linen into Ireland, with Belfast emerging as the most famous linen producing center in history. The majority of the world’s linen was produced in Ireland during the Victorian era.

The benefits of linen are numerous…it is stronger than cotton, has a high moisture absorbancy, is hypo allergenic and highly breathable, is very structurally sound, so products can hold their shape and last, but not the least, is environment friendly, due to the fact that the cultivation requires less water and chemicals. 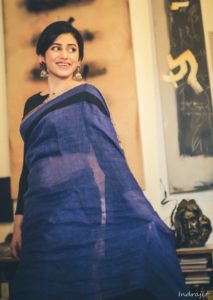 Suchismita was drawn by the lure of linen when she experienced the amazing softness and comfort of the fabric during her foreign travels. When Suchismita launched her brand Nextiles in 2004, her entire collection was based on linen. Her love story with linen continues in her experiments with linen sarees in a myriad of styles and colours. 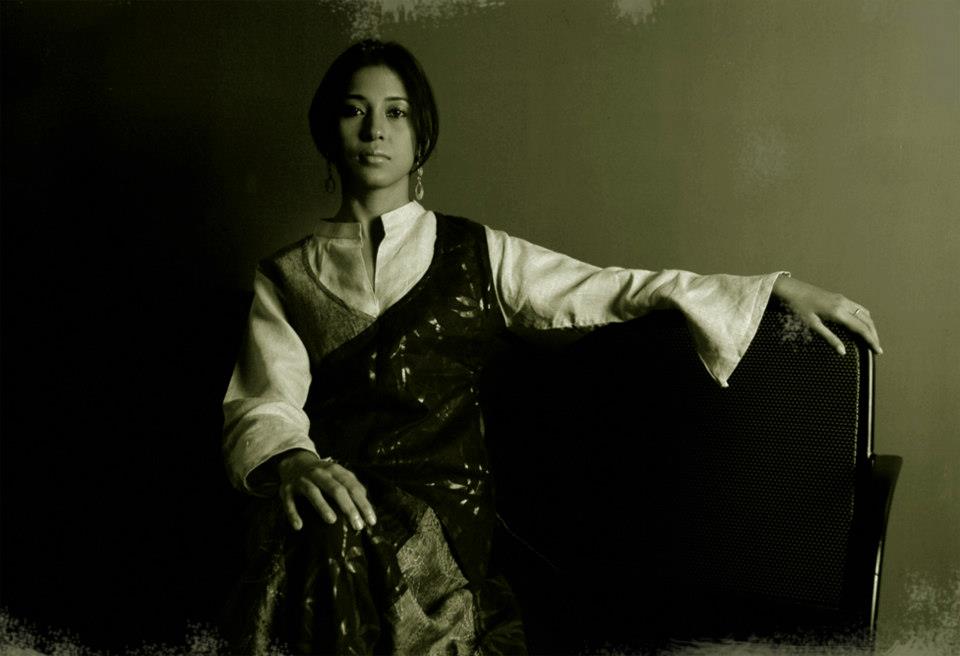 Great art has a way of inciting creativity and moving one to explore their own imagination and aesthetics. Suchismita’s creations often reflect her love for art and design.

The Art Nouveau movement, that combines exquisite craftsmanship with innovative forms and materials has always been a source of inspiration for Suchismita, prompting her to create a style that is distinct in it’s flamboyance and freedom. 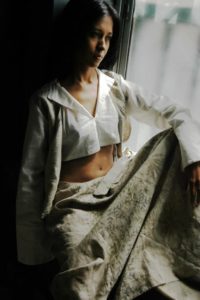 Specifically, Gustav Klimt’s ethos of mystery and sensuality has played a prominent role in Suchismita’s creations.

A masterpiece of Klimt’s Golden Phase is the portrait of Adele Bloch-Bauer I, one of Klimt’s greatest achievements, in which gold has been used in a variety of contexts. The painting embodies opulence. The subject seems to become one with her glowing surroundings, yet a distinctive figure emerges from the profusion of decorative motifs. Adele appears as a modern, complex woman, her intelligence as evident as her sensuality. Her hands are folded in such a way as to conceal a deformed finger, yet the gesture only adds to her mysterious grace.

Adele Bloch-Bauer was the only woman portrayed twice by Klimt in a full length portrait. It has long been speculated that she and Klimt had a love affair, and that Adele Block-Bauer I contains visual clues about their relationship. These include the numerous open-eye and almond shapes in the painting, which have sexual connotations. In addition, the subject is portrayed with great tenderness, and is ennobled by her regal setting. 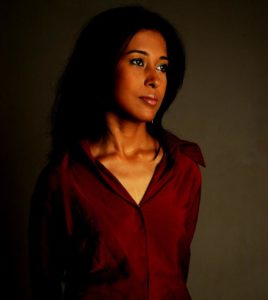 The layers of fabric and elaborate motifs together with the simple cuts of the gown inspired her to create a line of linen ensemble. Adele’s gown is painted with gold leaf and many motifs, the gold giving it a magnificent richness.

Suchismita desired a similar richness on linen, she printed the fabric with a unique binding technique that gave out a perfect sheen. Linen looked lustrous. The cuts were meant to be strong, yet very subtle. The motifs run a pattern, right through the ensemble, adding the quirk which Suchismita is known for. She combined different fabrics, playing around with texture and patterns to bring out the subtle whimsical distinction in the collar, the layers, the sleeves – all adding to a unique elegance that puts Suchismita’s collection a class apart.

Says Suchismita, “as a designer, I feel that everyone has a different style pattern which can not only be expressed by the use of different colours that suit the profile, but patterns.”

The unconventional and inventive play of lines and patterns has been expressed in creating a collection that spells elegance, charm, mystery and sensuousness. 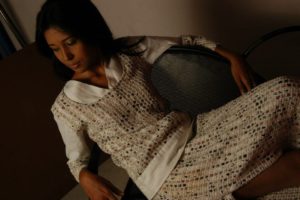 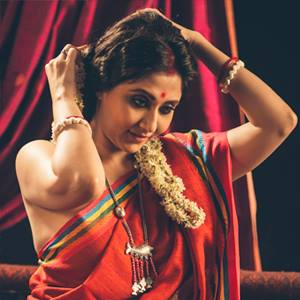 It’s again that time of the year and Durga Pujo is just around the corner. Durga Pujo to Bangalis have always been a glorious time, when families come together and there have been fun, frolick and lot of fashion thrown in between…. Thus to me Durga pujo has always been associated with lip-smacking food, fabulous fashion and a lot of  pure and clea 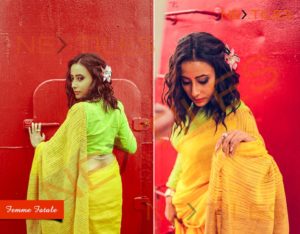 Who can get over the nostalgia or the attraction of having that cutesy good-looking guy looking at you with admiration? Or comparing notes with what the most fashionable friend is buying for the Pujo? Hours of thinking up entire ensembles for the four days had been absolute must while growing up.

While I was growing up, in that era; pujo fashion used to be ruled by films! Remember, MPK salwar kameez, that BHagyashree wore? Or that Cap that Salman sported? Even prior to that I have heard that UttamKumar in his heydays was the trend setter with his Guru Panjabi!
Despite the fashion scene being ruled by lot of Lehengas,Salwar Kamiz es or fusion dresses, to m 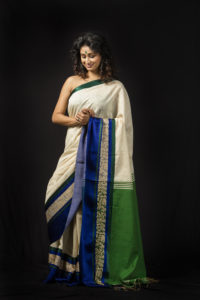 e , saree always took the foremost place specially for ashtami anjali and bijaya dashami immersion/bhashan… rest of the days would depend on whatever was in vogue. But since childhood, I have always preferred tailor made clothes, choosing the particular cuts, collars  and their detailing by myself. That is probably why, as a designer too I believed in developing a personal style than following fashion blindly.

With the onset of globalization and with the advent of local and international brands,  puja fashion has changed rapidly in the last 2 decades. But what has remained constant in these changing times, is the love and passion for dressing up during Pujo.
My favorite has always been saree from shoshthi to dashami. As much as I may wear casuals the year round…  Pujo have always managed to bring out the traditionalist and conformist in me.  I have Chosen lighter colour palettes  and cottons, linens and other light fabrics for day wears and heavier materials have been kept aside for the evenings. 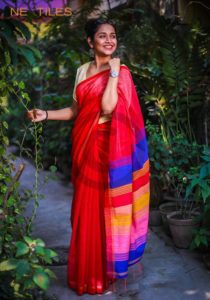 But these are just my fashion aesthetics,  and it definitely doesn’t mean that saree is the only go-to attire for pujo. My one suggestion would be, that whatever you decide to wear – Indian, Western or Fusion; choose your attire carefully, keep the occasion in mind, don’t over dress and don’t underdress either.  Just Don’t follow fashion blindly! Apart from the traditional white and red the colours which are trending this season are yellow  and fuchsia. Use accessories and make up judiciously and create a look that’s uniquely you.

Make a style statement for yourself. Be a Diva .