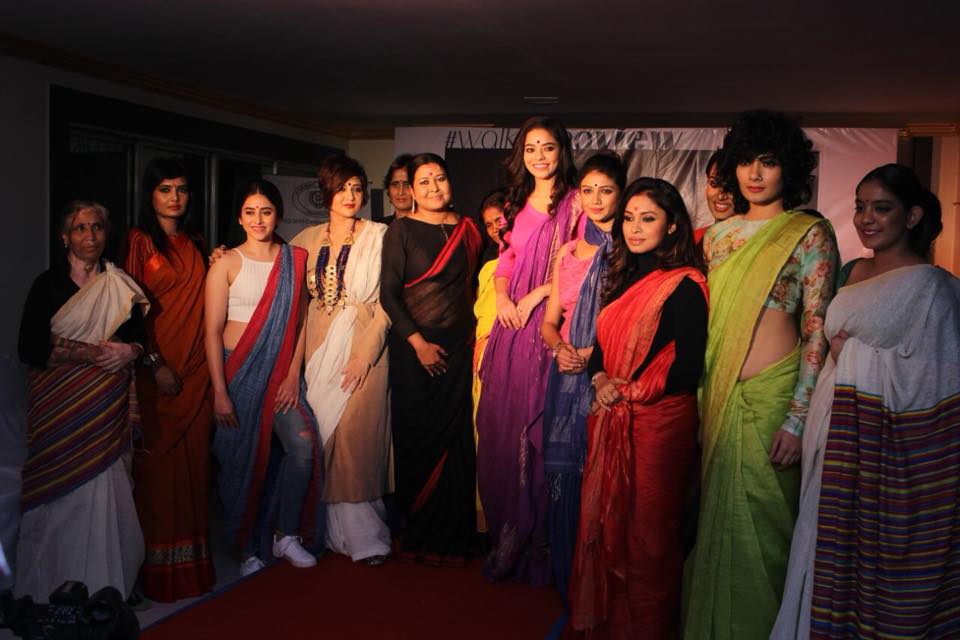 Nextiles walks with A View

The glitz and glamour of the fashion world, and on the other hand, some women whose life and memories have sunk into the deepening darkness. These are the two poles that Suchismita Dasgupta bridged recently.

Suchismita DasGupta is a well-known name in the fashion industry. From accountancy, she moved onto the creative pastures with complete elan. This time she chose to use fashion as a weapon to spread social awareness and message about mental ailment.

To raise funds for a voluntary NGO, Nextiles, Suchismita’s brand, showcased it’s wares on models who were far from the dazzling models who regularly scorch the ramp.

What exactly did you do in this Fashion Show? This was the first that Nextiles took part in a ramp show, isn’t it?

A friend of mine is a psychiatrist and she runs an NGO, where she treats homeless, shelter-less mentally unstable women. She has a shelter, where she brings them to treat them. Some, after being treated leave for their home, and some women stay on. There are lots of times when their family members don’t want to take them back also. It is during these times, that this organisation tries to teach them to be independent in doing small crafts or other works.

Yes, this was the first time Nextiles participated in a ramp show, because I believed that this occasion called for it.

How did making the twain of glamour and glitz of the fashion world and the mentally depressed women come together?

It may seem that they are completely different and on opposite poles, but having been associated with fashion fraternity for a very long time, I know how people can go into depression, when things don’t go in their ways, or an assignment doesn’t land up their way. Look at Dipika Padukone. She had the guts to come out in the open and admit the phases of depression she had been into.  So I felt it was the perfect platform to bring out how anyone, I mean any one amongst us, who can also suffer from depression or mental instability. 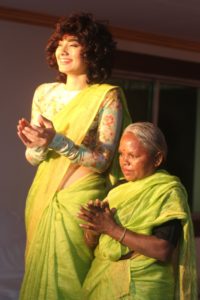 Did you have any special prep or colour palette in mind when you thought of doing this?

There wasn’t any preparation.  I just thought of the Vibgyor. The Rainbow comes after rain, bringing glimmer of hope and happiness. Thus, I chose the Rainbow colours and White. In fact, the doyens of the fashion and modelling industry came out to help me in this noble effort. Aniruddha Chakladar did the make-overs, well-known celebrated models like Swastika Mukherjee, Reshmi Ghosh, Riddhima Ghosh, Sauraseni Maitra, Puja Gupta and Sneha Ghosh all came forward to what we called #walkwithaview. The actors and models all walked with the residents, making this a one-of-a-kind evening.

My friends, Neel B Mitra, Aditi Roy, Sudarshana Ghosh & Purba RayChaudhuri had been of immeasurable help in mounting this whole act together, and I wouldn’t have been able to pull this off without them probably.

I am also thankful to Arko, Shamik and Ritoban…. Of Fiddlers Green, The MIlliputs, Rana Sarkar and Aahar for having come forward to help this cause.

Would you like to be associated with such NGO s in the future?

Since this was an organisation which I knew about and they had approached me, I took the plunge of doing this for the first time. Of course, if such opportunities arise in the future, I would like to do it with smaller organisations. 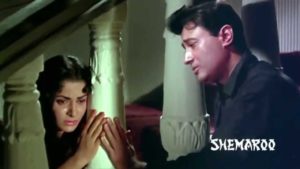 Who can forget the abandon with which an ethereally beautiful Rosie throws caution and taboos asunder to sing Kaanton se Khinchke ye aanchal in one of the most critically acclaimed yet popular film in Indian Celluloid history? Possibly none. The film was Guide and still remains etched in the minds of cine-goers globally.

Rosie was beautifully played by Waheeda Rehman ,one of the most talented and refined actresses of the Indian cinema. She is also one of the most beautiful and loved faces of Indian celluloid. She has wooed audience with her laudable performances in not only Hindi, but in Tamil, Bengali & Telegu also. She has been eulogised by many as the most beautiful actress,, but what had attracted me to her most was the intelligence and the poise that came across. She was a thinking, cerebra 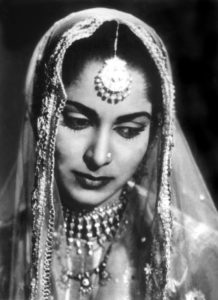 l actress who left her mark in some of the most unforgettable films in Indian Film history.

She is petite but not delicate. She may not look like a goddess but has an infectious charm and oodles of elegance. The glint in her eyes, the tinkle in her laughter, the mischievous surrender of her smile make her the perfect and undefeated child-woman. There is a touch of mystery in her which made the feted Guru Dutt consider her to be his Muse.

Her dancing abilities came into sharp focus in the film Guide and it is said that many had actually warned her against taking up the role of an adultress. But undeterred Waheeda gave almost the soul-in-her-eyes and a lifetime performance in the movie. 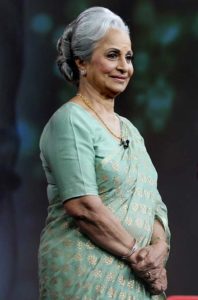 Waheeda Rehman oozes charm. You may love her, you may hate her, but you can never ignore her. She is the free spirited woman who is not scared to love. She loves being a woman with all its pleasures and pathos. Waheeda Rehman is a thinking-man’s actress. She is street smart, but she is also intensely feminine, who never forgets the flowers in her hair or her bangles.

She is the woman who surpasses the boundaries of age and times. Waheeda Rehman is eternally beautiful in her own right and is our constant inspiration.